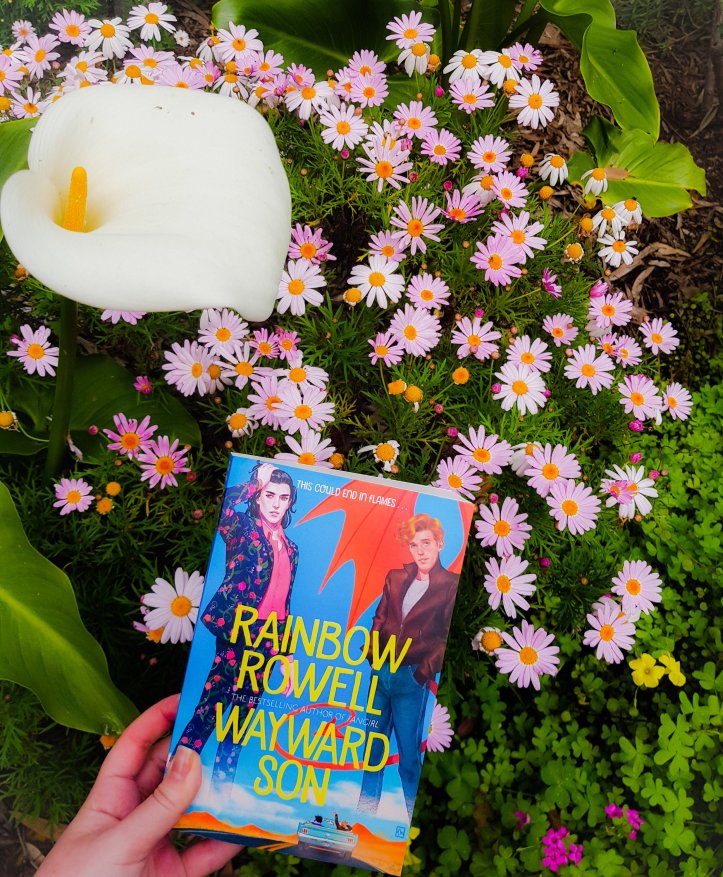 The second installment in the Simon Snow series.

Published on the 24th September, 2019 by Macmillian Children’s Books, an imprint of Pan Macmillian Australia.

Wayward Son, the sequel to Carry On, is the stunning new YA novel by the bestselling author of Fangirl, Rainbow Rowell. With all of her signature wit and heart, this is Rainbow at her absolute best.

The story is supposed to be over.

Simon Snow did everything he was supposed to do. He beat the villain. He won the war. He even fell in love. Now comes the good part, right? Now comes the happily ever after…

So why can’t Simon Snow get off the couch?

What he needs, according to his best friend, is a change of scenery. He just needs to see himself in a new light…

That’s how Simon and Penny and Baz end up in a vintage convertible, tearing across the American West. They find trouble, of course. (Dragons, vampires, skunk-headed things with shotguns.) And they get lost. They get so lost, they start to wonder whether they ever knew where they were headed in the first place…

Come on, Simon Snow. Your hero’s journey might be over – but your life has just begun.

A huge thank you to Pan Macmillian Australia for providing me with an early copy of this book to read and review, all thoughts are my own.

Wayward Son was a dream come true! I fell utterly in love with Simon Snow, Baz and Penelope aka Bunce, in Carry On, which became one of my all time favourite books! I remember immediately longing for a sequel, this was prior to Wayward Son being announced! So to say that this has been one of my most anticipated reads of the year is definitely accurate!

When I first picked up Wayward Son, I felt like I’d reunited with dear friends after a long time apart! I thought about rereading Carry On prior to getting stuck into this sequel, but ultimately decided against it (also lack of reading time lately has certainly been a thing). However, it turns out, everything that happened in Carry On, came racing back to me in all its wonderful, glory of feelings!

In terms of our main characters, Baz, the vampire and of course our hero Simon Snow, and his best friend Penelope, they remained as engaging as ever as narrators! I just felt so sad for Simon and Baz, after the climatic events in Carry On, Simon is definitely feeling useless and melancholy, as if he had lost his purpose. I just wanted to give him a huge hug! What’s more though, I wanted Baz to give him a huge hug! They’re all kinds of perfection, as individuals (not without their flaws of course, as Baz faces some personal demons and obstacles throughout this adventure).

What an adventure it was, too! So wild and often dangerous, I cannot even begin to express how fearful I was for our gang! Even the usually confident-headed Bunce had some troubles throughout this book, I felt so sad for her at first, though I’ve always admired her steely loyalty to Simon (Agatha too) and her determination to see a mission out until the end.

When Penelope detects that something is amiss with Agatha, as well as not liking seeing her best friend (Simon), in such a sad state, she initiates a road trip across America, in order to rescue Agatha from the trouble she may have got herself into, as well as rejuvenating Simon. I loved everyone’s points of view being carried across during their adventure, I could feel everyone’s determination and angst! As a result of Simon’s melancholy state, his relationship with Baz definitely took a tumble, which was so sad! However, I did enjoy both characters’ angst and could easily feel their love for one another, their just so precious! I need more of them in life! I honestly delayed finishing this book because I didn’t want it to end!

I found myself surprised (in a pleased way), about Agatha’s story arc in Wayward Son, she’s never been a huge fan of her magic (or magic in general), and was trying to escape what is always going to be a part of her! I hoped she would see sense, I don’t think she ever bought into Braden’s insane ideals, (him being of an organisation with really not great intentions). The chapters with Agatha though were really engaging (and slightly unnerving, but wholly enjoyable, for I couldn’t decect anything that was coming! Who could our friends trust? I truly didn’t know! There was especially one character who enters our friends lives, I was so weary of him! I felt like he was earnest but I really wasn’t sure, and it kept me so curious throughout! I think that’s just one of the many engaging aspects of Rainbow Rowell’s wonderful writing! Also, how whimsical are their spells? I just love the odd incantations!

I’m missing everyone already! Wayward Son is the perfect follow on to Carry On, with a whole lot of magic and excitement throughout! You will love this book!

Let’s talk! Are you excited for Wayward Son? 🙂

⭐⭐⭐⭐⭐⭐Oh. My. Heart. As soon as I picked up 'She Gets The Girl' by Rachael Lippincott and Alyson Derrick, my heart felt so happy! 💖 This has honestly swiftly become one of my new all time favourite books, the urge to instantly start rereading it as soon as I finished was oh so strong! 😩💖 Alex and Molly. Molly and Alex. Polar opposites, Alex, delightful, flirty, chaos and Molly, organised, lovely, awkward - both so unflinchingly raw and real written, I literally wanted to reach within the pages and hug them throughout! 🥺 I laughed and cried with this book, it was definitely a beautiful, wholesome, feels-fest! 🥺 Annnnd it's LGBTQIA+ (what more do we need?! 😍) I love that it's written by a wife and wife team, the fact that it was loosely based on the days of their own relationship made my heart so happy! 🥺💕 I love that both Alex and Molly were so deadset on getting their love interests, Molly with her crush on the inexplicably cool Cora, and Alex trying to prove to Natalie that she is ready for a serious relationship! (That being said, and without treading the spoilery waters too much, I had some suspicions about Natalie, but oh, how I wanted Alex (and Molly of course!) to be happy! 💕 I will easily admit, I was not so secretly shipping both of these characters from the get go - I just freaking adored their dynamic and their banter (not to mention their amazing, electric chemistry and cute moments, which were in abundance!), throughout! ⭐⭐⭐⭐⭐⭐⭐
Ah, the joys of Meerkats! 🥰 These little critters are just the sweetest! 😭😍 Adelaide Zoo (@zoossa) is home to many a meerkat, each as equally adorable as the other! 😍 This beautiful girl though is a bit more unique than her siblings, due to a lack of pigments, I believe - but she's always happy and healthy and definitely enjoys playing with her siblings! 😍
Hello lovelies! 👋 I hope everyone's been well?! ☺️ I've been quite happily busy as always with, well, life! 😅🤣 But I finally actually got to read today which is fantastic! 😍 I've been a bit out of the swing of things reading wise but I'm reading 3 absolutely gorgeous books rn so I'm excited to gush about them all! 💕🤗 They are 'The Blood Traitor' by Lynette Noni, 'She Gets The Girl' by Rachael Lippincott and Alyson Derrick, and 'The Memory Librarian' by Janelle Monae! 😍
I earnestly feel like this beautiful, majestic lady Amani has effectively captured everyone's #MondayMood @zoossa 🦁
The No Show by Beth O'Leary - ⭐⭐⭐⭐
📚 May 14th, 2022 📚