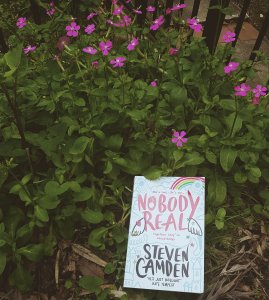 Marcie is at a crossroads.

Finished with school, but unsure what she wants to do next. Abandoned by her mother when she was tiny – but drifting further and further from her dad.

Marcie is real. With real problems.

Thor is at a crossroads too.

Soon, if he doesn’t make a decision, he’s gong to face the fade. Years ago, he was Marcie’s imaginary friend – then she cast him out, back to his own world.

Thor is not real. And that’s a real problem…

But Marcie and Thor need each other. And to fix their lives, they’re going to have to destroy everything… and then build a new world.

This book was so powerful and engaging, every single page had me thinking what could possibly come next and wondering what on earth would happen with Marcie and Thor, like, the latter is an imaginary friend of Marcie, a bear, in fact, yet, he felt so real? It was just incredible!

This quote was pretty much circulating throughout my head whilst reading this book, and I imagine that Steven Camden’s intention was to have the reader reflect about their own imaginary friends? For who didn’t have an array of them, I know I certainly did! And that’s what made me slightly connect with Marcie, I suppose.

But it was the structure of this book, I think, that had me so engaged! The fact that the author writes in dual points of view, from Marcie, or Mars, as she’s fondly known as, and Thor, her imaginary friend.

A perspective told from a non existent character?!

I mean, I was enthralled all the way through! I felt so many emotions throughout his chapters, like, there were times when I felt oddly terrified? I didn’t know what Thor would do next, I mean, I knew he couldn’t do anything but the power of his narration was absolutely epic! I mean, there were scenes where Thor was talking to a Doctor about his reckless behaviour, and possible eventual exit from Marcie’s mind, it was just insane but brilliantly memorizing!

Marcie herself was such a fascinating character, a teenager who read as someone far more older than her years, who always wanted to know what happened with her mother, and who always loved reading and coffee (also relatable, huh?).

What I also loved in this book were the flashbacks, also told in dual Thor and Marcie points of view, which just went to highlight how the two relied on one another through their turbulent times. Yes, I say one another because some Thor focal chapters chronicled his own imagination, which just shows the power of Camden’s writing, and Marcie’s imagination!

I’ll leave it there, but sufficed it to say, I cannot recommend this book enough, and it’s something that will stay in my mind for some time!

Happy Saturday lovely readers! I hope everyone's having a great weekend 🤗 I'm super excited to be sharing a book review, I'm so glad that ridiculous slump I landed myself in is over with! 🙌
Happy Thursday lovely bookish people, I hope you're all having a wonderful week! 🤗 What's something that's made you happy as of late? 🤔 For me, a couple of things certainly have, one of which absolutely being the fact that the @statelibrarysa have had their large Christmas Tree put up in their absolutely gorgeous, dreamy Mortlock Wing (one of my favourite places tbh 😍), and oh, getting to just enjoy the ambience of the festive carols being played and admiring the lovely tree (it's on show until 9th Jan, I know I'll definitely be going back many a time, hopefully! 😍), I've also taken a few other photos which I'll absolutely be posting throughout December, there's a comfy armchair down the bottom of the tree where one can enjoy festive stories, but for the moment I'm holding in this photo some new book purchases, which also always make me happy! 💛
November 21st, 2021 📚
November 19th, 2021 📚
November 14th, 2021 📚
✨ International Wishlist Giveaway ✨