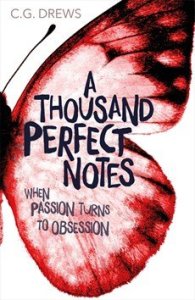 Published in 2018 by Orchard Books

An emotionally charged story of music, abuse and, ultimately, hope.

Beck hates his life. He hates his violent mother. He hates his home. Most of all, he hates the piano that his mother forces him to play hour after hour, day after day. He will never play as she did before illness ended her career and left her bitter and broken. But Beck is too scared to stand up to his mother, and tell her his true passion, which is composing his own music – because the least suggestion of rebellion on his part ends in violence.

When Beck meets August, a girl full of life, energy and laughter, love begins to awaken within him and he glimpses a way to escape his painful existence. But dare he reach for it?

This book definitely took me by surprise, the amount of emotion that was poured into it was evident, and conveyed so well across the page that I often found throughout that I had to close the book and process what I’d just read!

Beck instantly had my heart in pieces for him, truly! I mean, what his mother relentlessly put him through, the neglect, the abuse, physical, emotional and mental, stopped at no end, all that the Maestro saw was that she could never be a piano prodigy, so she poured all her efforts into making her son sick and neglecting her daughter!

It was just so heart breaking to read about, as August and his little sister Joey were just both so precious and memorable! I found myself cringing when the Maestro was inflicting her abuse on them, I couldn’t help but feel so emotionally drawn to them, so I was hoping that they’d both be safe throughout and at some point the Maestro would see past her blind fury.

I mean, she was constantly belittling Beck, saying how worthless he is – no one should hear that from their mother, a mother is meant to be loving and nurturing, and it was written throughout that Beck and Joey were often going without meals and proper clothes, and Joey rarely got toys, all the Maestro saw was the piano, and she never thought to see how her children were really faring! She was such a nasty character, selfish and blinded by her own hopes and her wish that her son would be better than she could’ve been, regardless to what he wanted!

August and Joey were definitely the refreshing and pleasant lights throughout this book, I mean, Joey cracked me up throughout, she’s a precious little pre schooler who wants to be queen of the world and who adores her elder brother, and she’s literally the light of Beck’s life, I just love how much he cares for her and despite the constant throttles that he endures from his mother, he is determined not to allow Joey to be treated the same!

And August, barefoot and loving and tender, who adores animals and has a soft spot for Beck and Joey, I adored her! She felt like such a breath of fresh air, some bubbly light compared to the darkness in Beck’s life, and I love how she wouldn’t stop trying to cement their friendship, see, Beck (due to the Maestro), is petrified to make friends, she’ll think he’s distracting himself from the piano, but August is just so free spirited and willed and oh, she was just brilliant! I love the scene at her house, her parents and animals were so fun to read about!

So it’s sufficed to say this book definitely impressed me, I love the symbolism throughout and I feel like next time I listen to Beethoven, I’ll hear and think of Beck and remember this book!

Thank you Hachette Australia for providing me with a copy of this book to review.

I earnestly feel like this beautiful, majestic lady Amani has effectively captured everyone's #MondayMood @zoossa 🦁
The No Show by Beth O'Leary - ⭐⭐⭐⭐
📚 May 14th, 2022 📚
💚 Friday 13th, 2022.
#AD-PRProduct -
Hey lovely bookish souls, how're we all today? 🤗 I'm super excited to share some #BookMail that was waiting for me when I got home tonight ☺️ I'm so, so excited to read these two books - 'Book Lovers' by Emily Henry and 'She Gets The Girl' by Rachael Lippincott and Alyson Derrick (I mean a wife/wife writer team, yes please? 😍💕)