Book Review: The Girl Before by JP Delaney 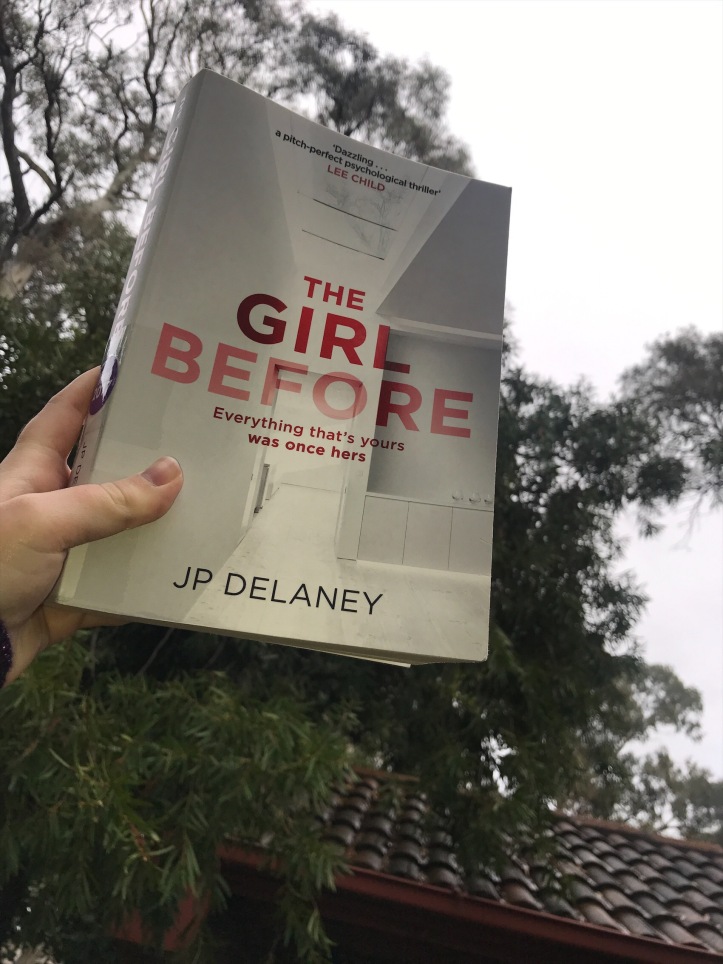 Published in 2017 by Ballentine Books

Please make a list of every possession you consider essential to your life.

The request seems odd, even intrusive—and for the two women who answer, the consequences are devastating.
Emma
Reeling from a traumatic break-in, Emma wants a new place to live. But none of the apartments she sees are affordable or feel safe. Until One Folgate Street. The house is an architectural masterpiece: a minimalist design of pale stone, plate glass, and soaring ceilings. But there are rules. The enigmatic architect who designed the house retains full control: no books, no throw pillows, no photos or clutter or personal effects of any kind. The space is intended to transform its occupant—and it does.

Jane
After a personal tragedy, Jane needs a fresh start. When she finds One Folgate Street she is instantly drawn to the space—and to its aloof but seductive creator. Moving in, Jane soon learns about the untimely death of the home’s previous tenant, a woman similar to Jane in age and appearance. As Jane tries to untangle truth from lies, she unwittingly follows the same patterns, makes the same choices, crosses paths with the same people, and experiences the same terror, as the girl before.

Let’s talk about the plot:

Okay, so I was definitely intrigued when I first started this. I enjoyed the multiple chapter point of views, and it was definitely reading as something unique – initially it all read as one long paragraph in the chapters, and even when there was dialogue, there weren’t any speech marks. This gave me Illuminae type vibes; it felt like I was reading an undesclosed document.

So from the past we have Emma and Simon, two seemingly in love people who have moved into this insane house, which sort of reminded me of the futuristic home in the Simpsons, voiced by Pierce Brosnan. It was high tech and there were a crazy set of rules and regulations Simon and Emma had to abide by, why they even wanted to live there? I don’t know. I have so many unanswered questions it’s infuriating.

And we have Jane, in the future; who is moving into the same house many years later; and seemingly has lots in common with Emma, who we learnt met her fate in the house.

This is where the mystery sets in, and its full of dramatic irony which was brilliant, but the ending ruined it for me. Okay so i was really annoyed by the revelation, of who killed Emma, I didn’t see it coming; but the ending, as it were, of Jane’s story, just made me think:

‘Are you kidding? You went through all this crap and that’s how you react?’

Let’s talk about the characters:

Both characters had much in common, they even shared an appearance. Literally their lives were almost identical, and even though they never met, Jane definitely felt Emma’s prescience throughout (and Jane finds herself caught up in Emma’s murder, seen as her ex boyfriend thinks it’s Emma’s lover who killed her). Essentially this book was full of a love square, even though it happened over two different times. I found both Emma and Jane to be fickle, their mood swings annoyed me, they went from feeling love to hate in half a minute. Ugh!

Edward, the architect of this ridiculous house, annoyed me from the start. So we initially feel sorry for him because his wife and infant son are killed prior to this book, but we don’t know how, exactly. Well we’re given a reason but I didn’t buy it, it might have been a cover up, but who knows.

He’s a psychopath, he treats both Emma and Jane despicably, and Simon isn’t much better; Simon says that he hates Edward, but honestly, he’s not much better, in fact, I don’t know who’s worse by the end. They’re both egomaniacs and it’s ridiculous, I hate any novel that is so suggestive towards domestic violence, so that made me particularly angry.

Let’s talk about the writing:

Okay, so as I said, the writing was unique to start off with, and defined atmospheric. But it got repetitive, and it was frustrating reading it continuously without the speech marks (unlike Illuminae, the novelty wore off pretty much instantly). I felt also that this book definitely dragged in places, it felt so much longer than its 406 pages. The one twist wasn’t nearly enough to save this book, and I can’t say I’d recommend it to anyone else in a heartbeat, but again, this is just my thoughts. That one decision of Jane’s annoyed me so much, I felt like it went against her character entirely.

And as for Astrid, who we meet at the end, all I’ll say is, good luck.

And that concludes my review, thanks for reading,

I earnestly feel like this beautiful, majestic lady Amani has effectively captured everyone's #MondayMood @zoossa 🦁
The No Show by Beth O'Leary - ⭐⭐⭐⭐
📚 May 14th, 2022 📚
💚 Friday 13th, 2022.
#AD-PRProduct -
Hey lovely bookish souls, how're we all today? 🤗 I'm super excited to share some #BookMail that was waiting for me when I got home tonight ☺️ I'm so, so excited to read these two books - 'Book Lovers' by Emily Henry and 'She Gets The Girl' by Rachael Lippincott and Alyson Derrick (I mean a wife/wife writer team, yes please? 😍💕)